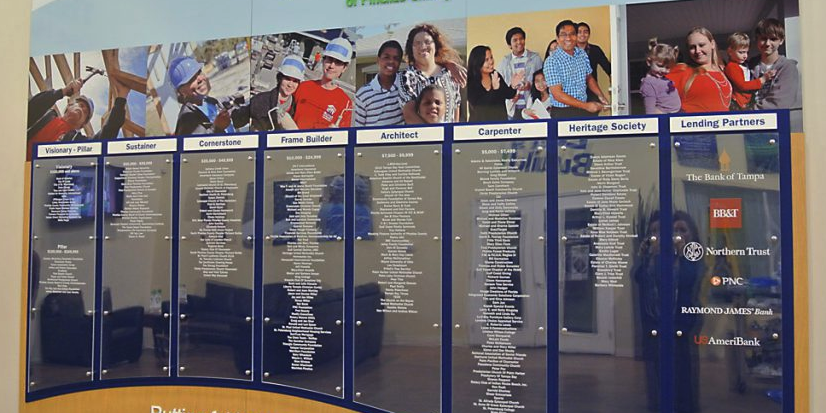 We would like to feature a wonderful client of ours: Habitat for Humanity of Pinellas County. While the display has been updated over the years as donations continue to pour in (one of the great things about a changeable panel donor wall), it remains just as pristine as the day it was installed.

Habitat Pinellas believes in the method of bringing people together. They believe that no lives in dignity until everyone can live in dignity. Habitat homes are not a handout; they’re a hand up. Their houses are built on existing community assets. In seeking transformed communities, Habitat Pinellas believes bringing people arm in arm to improve housing is an essential process for building not just four walls and a roof, but hope. Only when we work together can we bring about real change, and it was an honor to collaborate with this dedicated nonprofit.

By utilizing donor recognition, they not only retain loyalty from their patrons who have thousands of options of where to donate their money (retention is KEY), and create promotional material to elicit large donations. Legacy is a very important part in many donation transactions. Consider creating a donor wall concept BEFORE you fundraise, as it only makes it easier. Thanks to the support of the community, Habitat Pinellas as able to build 55 NEW HOMES in 2018! Huge congratulations to them on their hard work towards solving the housing crisis across the county.

Take a look at their blog from their unveiling of their changeable panel donor wall: https://www.habitatpinellas.org/blog/posts/habitat-pinellas-unveils-new-donor-recognition-wall/